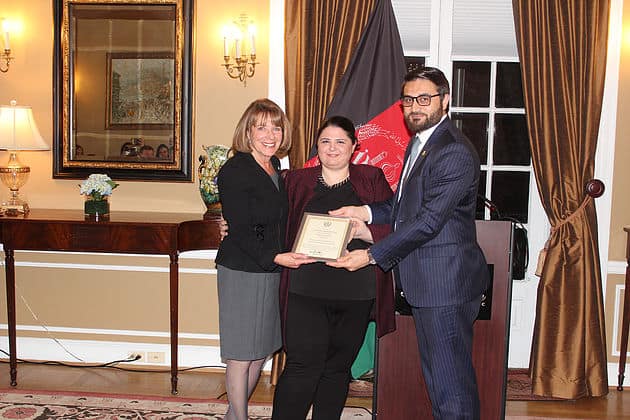 On Wednesday, November 8, 2017, the Embassy of the Islamic Republic of Afghanistan in Washington, DC hosted a reception on behalf of Women for Afghan Women (WAW). The event was well-attended, and included high-level diplomats, government officials, philanthropists, and members of civil society.

His Excellency Hamdullah Mohib provided opening remarks about the state of Afghanistan and efforts made by the Afghan government towards empowering women and girls. The Ambassador highlighted President Ghani’s decree to review the cases of women detained for so-called “moral crimes,” which resulted in the release of over half of the women incarcerated throughout Afghanistan. To prevent future imprisonment of women for running away from their abusive husbands or families, he asked the Supreme Court to review the legal underpinnings of the crime, which resulted in the reversal of the legal practice. In January 2016, the government created a trust fund to aid victims of violence against women. Ambassador Mohib also addressed the substantial gains women and girls have made since 2001, as well as the existing challenges they face. He then highlighted the significant work non-governmental organizations, such as WAW, perform in addressing the needs of survivors of gender-based violence. In particular, he praised WAW’s Executive Director Manizha Naderi as a leading champion of women’s rights in Afghanistan and around the world, and expressed admiration for her optimism for the future of her homeland and role women and girls can play in the future stability and prosperity of Afghanistan.

Next, Manizha detailed the holistic approach and direct services of WAW throughout Afghanistan and United States. She described the ways in which WAW is shifting cultural attitudes and societal norms surrounding gender-based violence and women’s rights through the extensive outreach local staff are undertaking with imams, tribal leaders, and local officials to help teach men, as well as women, girls, and boys about women’s rights as human rights. Manizha detailed how WAW has helped nearly eliminate the imprisonment of school aged children with their incarcerated mothers, as well as the success WAW has had in ending the prosecution and imprisonment of women who ran away from abusive husbands and families, and instead having them transferred to WAW shelters for free health, legal, and financial assistance. She explained that WAW’s culturally-sensitive efforts utilize the principles of Shari’a to ensure enduring and extensive support for women’s rights in Afghanistan.

The keynote speaker of the evening was Representative Susan Davis (CA-53rd), a long-time champion of Afghan women and girls in Congress. The Congresswoman talked about her experiences serving as the head of annual Mother’s Day Congressional Delegation (CODEL) to Afghanistan after several initial trips to the country that allowed her to connect with Afghan women in a way that her male colleagues could not. She outlined the progress and changes she has witnessed firsthand. She provided an anecdote about one school that was having difficulty recruiting students—the following year, they needed more desks. She highlighted the transformation she has witnessed in the manner in which brothers treat sisters, and noted that true cultural attitudes towards women and girls must begin at the domestic level. This, in turn, will open opportunities for them in educational and professional pursuits, and can lead to a seismic shift in the free exercise of women’s and girl’s rights in Afghanistan.

As a leading member of the House Armed Services Committee, Congresswoman Davis has been a vociferous advocate for funding and programs that incorporate women into the Afghan security, defense, and police forces. She announced the procurement of an additional $16 million dollars in funding for training and equipping women to serve in addition to the $25 million appropriated last year for a total of $41 million. She noted that she continues to work within Congress and United States military apparatus to stress the need for women’s leadership in security, and to reaffirm the security and stability of Afghanistan is imperative to the national security of the United States.

Congresswoman Davis wrapped her remarks by recalling the honor she had in meeting with the Afghan girls’ robotics team during their competition in Washington, DC in July, and the substantial progress and hope they represent for the future of Afghanistan. While acknowledging the challenges facing the country and people, she committed to working together with Women for Afghan Women and all those in attendance to building on gains made and helping to create a brighter future for Afghan women and girls.