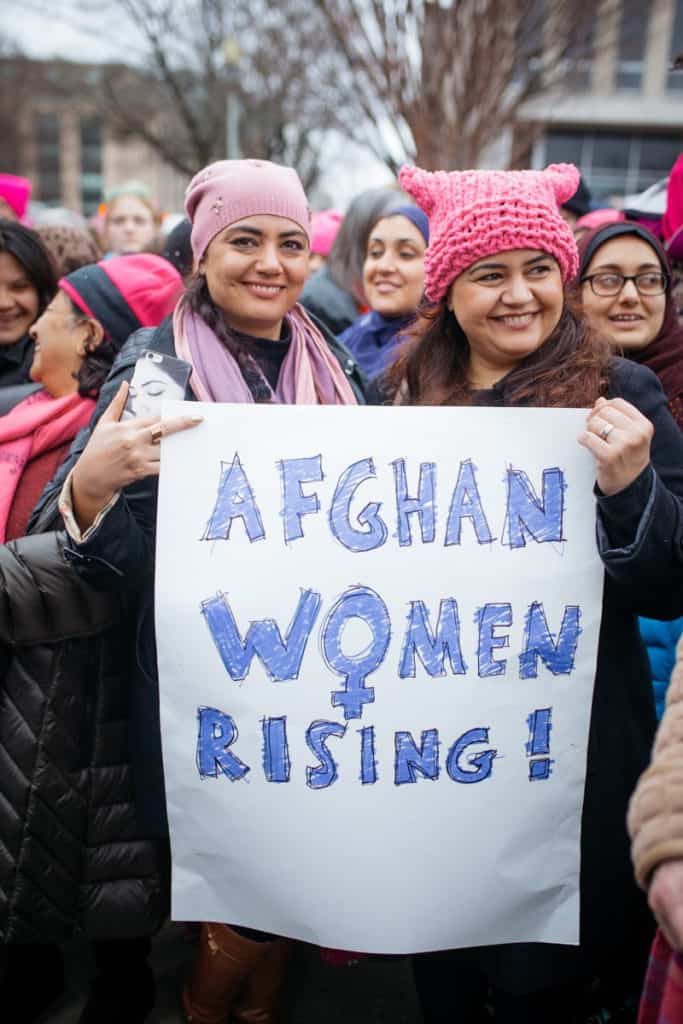 I watched the inauguration ceremony with a room filled with immigrant women at Women for Afghan Women’s, Queens Community Center. Single mothers, grandmothers, and volunteers all watched the TV screen nervously as a new Administration was now being placed in power. There was a lot of disappointment in the room, and a lot of nervousness about how the political climate will affect their families. The one thing that kept me optimistic that day, was the tremendous force of resistance Washington, DC was going to meet the next day, in the form of the Women’s March on Washington.
Early morning on a Saturday, a group of 40 Afghan women decided to get on a bus and head to Washington D.C to add their voice to the million strong Women’s March. Despite the growing fear of hate crimes and bigotry, these women were ready to fearlessly stand together to protect their rights. Zubaida Jan, was quite nervous about participating in the march. “Honestly first I was afraid to go, because I didn’t know what to expect. I was afraid to go because I wear hijab, and because some politicians always says bad things about Muslims. At the women’s circle (a monthly discussion circle at WAW), I heard the lawyer talk about safety and that we had to go and show the world our hijab and show them that we are not afraid of who we are, I felt safe and right away I decided to go with my daughter and granddaughters. Even my husband told me to go and stand for women’s rights”.
On the bus, these women were excited about joining the Women’s March. Most of these community women has never left the borough of Queens, and now they were traveling to the nation’s capital to make history. Women were singing along to Afghan songs and made the long journey from Queens to Washington D.C more memorable and joyful.
These women come from Afghanistan, a difficult place to be a woman. “When I was in Afghanistan I didn’t even dream of doing something so big, all I did was cook clean and take care of my kids and family”, Zubaida Jan recalls. “This is the first time I attended an event like this, I didn’t just march for me, I marched for all the women in Afghanistan who can’t stand for their rights”, Zubaida Jan.
“Once we got off the bus, we walked to the train station and took the train to the place where the March would [begin].  Once we got there, there were all different kinds of people from different states, which all added up to more than 500,000 people. There were many funny signs and signs that [spoke of rights]. A poster, written by Women for Afghan Women, wrote “Afghan Rights = Human Rights”, Marwa Khawaja, 13. 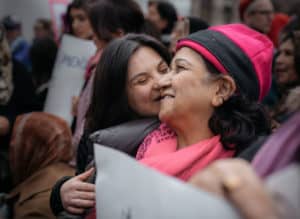 The Women’s March, meant something different to each and every single person, but for these Afghan women, it served as a space to say that they fight to protect every inch of their rights.  “We are not less than any men, and we can’t accept whatever we are told. We have rights but we have to stand up for it or otherwise we can’t complain about it. So today I’m marching for that” said Sabera Samadi.
These women know that though the current political climate entices fear in the hearts of many minority communities, they have Women for Afghan Women and more importantly, they have each other. Their voices are much stronger when they stand together.
Photos courtesy of Zayira Ray, 2017