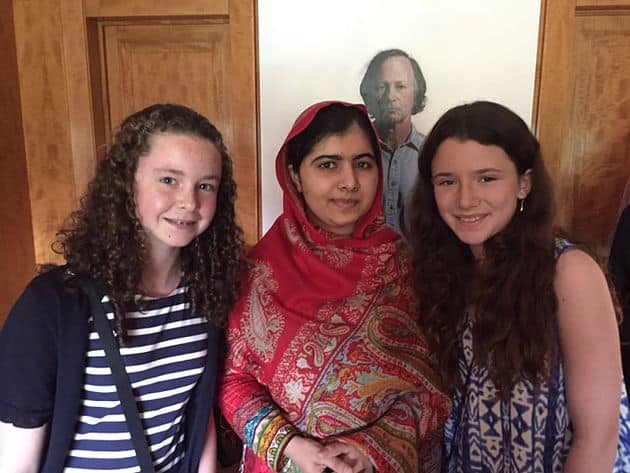 Last week, I had the honor and pleasure of attending a small luncheon where the special guests were Malala Yousufzai and her father Ziauddin Yousufzai. I have admired them both ever since the attack Malala suffered at the hands of the Taliban, and it is my great fortune that I met them not at a huge event but at an intimate luncheon where I could speak with them at leisure.

This encounter with Malala and Ziauddin confirmed something that I had always suspected — that the struggles of Afghans and Pakistanis are very closely connected, if not one and the same.

Malala was shot by the Taliban because she was a young girl in Pakistan daring to advocate for girls’ education. And just this week our WAW facilities in both Kunduz and Kabul had to be evacuated because of Taliban attacks. As I listened to Malala and her father speak, I was also reminded of how much my own life had been affected by the Taliban.

Back in the 1990s, when the Taliban were in power in Afghanistan, my family had fled to Peshawar, Pakistan. And for one year my sisters and I had to stay home from school because the refugee girls’ schools were closed.  Staying home from school and feeling devalued, was very painful. To this day I feel the loss that came with that break in my education, that wound to my spirit.

While Ziauddin speaks English very well, he and I spoke in Pashto, and this was very special to me.  He reminded me so much of my own father, with his kind eyes and gentle manner. He was pleased when I told him this.  My father was the first in our family to allow all his daughters to attend not only school, but also college. He always told us it was important to stand on our own feet, even if we got married. Ziauddin smiled, and said this is exactly what he tells Malala.

Ziauddin said it isn’t enough to just send one’s own daughters to school, although that is a great start. He talked about the importance of everyone who has privilege doing their part to change society and culture. He said that even though he himself believes in human rights so passionately, he sometimes makes mistakes as a result of deep cultural conditioning. He gave an example: One day he told Malala he was going for a walk with his older son. He asked Malala not to worry because he was leaving her younger brother to take care of her.  Malala had to correct him and point out that Malala was the older child, and it was she that would be taking care of her younger brother.

Ziauddin looked sad and regretful as he spoke of his own childhood -how his parents treated their daughters differently then their sons, giving the boys the best education and keeping their sisters at home; how his mother would always give his brother and him the best part of the chicken, while his sisters were given the remains. If only he had understood at a much younger age what that must have felt like for his beloved sisters.

Ziauddin was impressed when I told him about the work of WAW, but he said, “It is important to include men in the dialogue.  Working only with women will not help.”

I took two young girls to the luncheon, Brooklyn 6th graders Rosa and Mairin. These two girls, along with some of their friends, were so upset by what happened to Malala, that they decided to do something about it — at age eight!

They were so inspired by Malala’s courage that for three years in a row, they have organized a Readathon, with the proceeds going to support girls’ education. One year WAW was chosen as the recipient of the funds raised.  Last year, they raised $10,000 for the Malala Fund. It was thrilling to see Rosa and Mairin meet Malala, the inspiration behind their activism. Malala is such a young girl, but these girls are even younger. If a person wants to make a difference, they can do it at any age. I wish more young people, especially here in the West, understood the extent of their privilege. In Pakistan, Afghanistan, Nigeria, and so many other countries, girls risk their lives to go to school, something kids here take for granted.

It was Malala who pointed out, and I completely agree, that it isn’t enough to have schools open if the quality of the education isn’t excellent, and if students are not taught about their rights.  Malala gave the example of textbooks she herself had been subjected to as a small child in Pakistan, in which animosity towards India was encouraged. “It is so wrong to teach young children to hate.  It is so important to teach children about the need for peace.”

Malala insists that she is just a girl, an ordinary girl. I don’t see Malala as ordinary; I think of her as extraordinary, truly a hero. But I do agree that there are many heroes like her, and it is such bravery that gives me hope:

Malala and her amazing family, who have made advocacy for human rights their very life;

Our own WAW staff in Afghanistan who go to work each day not knowing if there will be a Taliban attack or a suicide bombing;

Our brave clients who decide that they will speak out against abuse and assert their rights even though they may lose their lives as a result; and

Young Rosa and Mairin, who could live their lives without a care or concern, but instead choose to rally their classmates and peers to stand up for the right of all children to go to school and live in peace.