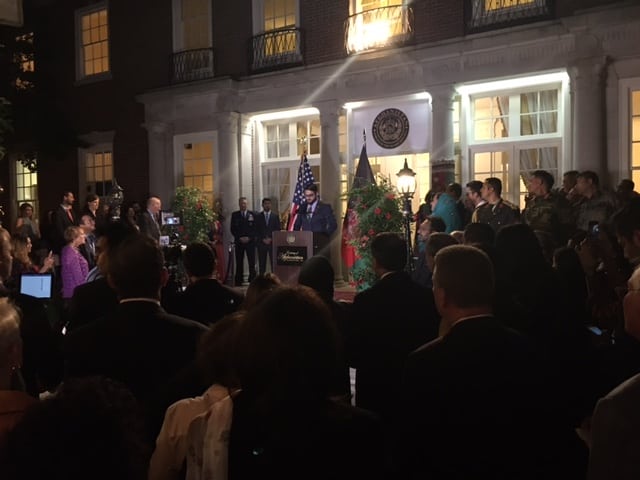 On Monday, September 25, 2017, the Embassy of the Islamic Republic of Afghanistan in Washington, DC hosted a reception to celebrate Afghanistan’s 98th Independence Day. Women for Afghan Women’s Director of Advancement, Kim Otis, and Advocacy Manager, Megan Corrado, were in attendance, where they were treated to a musical performance by Atiquallah Kakar and the singing of the Afghan and American national anthems by John Eaton Elementary School students.

Mrs. Lael Mohib welcomed the extremely well-attended event, which included high-level officers from the Afghan and American militaries, diplomats, Administration officials, members of Congress, policymakers, civil society activists, members of the Afghan-American community, and Malala Yousafzai. His Excellency Ambassador Hamdullah Mohib detailed the history of Afghanistan over the course of the last 98 years, existing challenges, and the dramatic progress women and girls have made since 2001. He praised the strong relationship between Afghanistan and the United States and struck a hopeful tone for continued gains, democracy, and the free exercise of human rights in Afghanistan.

The United States Department of State’s Acting Special Representative for Afghanistan and Pakistan, Alice G. Wells, then addressed the crowd to reaffirm America’s commitment to enduring peace and stability in Afghanistan, also noting the tremendous strides Afghan women and girls have made in recent years. Lieutenant General John Dolan, the Director of Operations (J-3) of the Joint Staff spoke on behalf of the Joint Chiefs of Staff of the bravery and commitment of the Afghan military and people in their efforts to procure a brighter future. He recognized the sacrifices made by both American and Afghan troops and the significant loss of civilian lives in the fight to eradicate the Taliban and other extremist elements in Afghanistan, but pledged continued friendship with and support for Afghanistan.

After the formal remarks, the crowd was delighted by a performance of the Attan Traditional Dance by young Afghan women who are students at Virginia Commonwealth University. The evening marked a celebration both of Afghanistan’s independence from Great Britain, as well as a strong relationship between Afghanistan and America in their joint efforts to promote peace and prosperity. 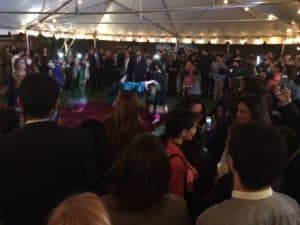 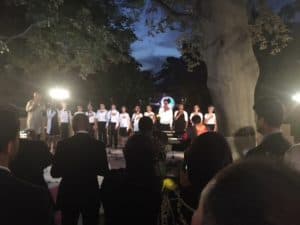