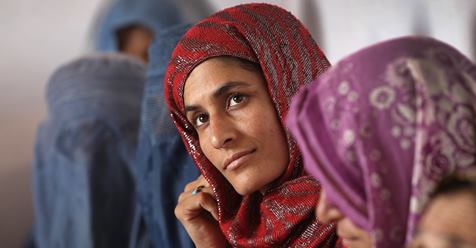 For the first time in years, a peace process in Afghanistan is underway in earnest. A framework emerged from recent talks between the United States and the Taliban for further negotiation, including: a phased U.S. withdrawal, preventing Afghanistan’s return to an extremist safe haven, a ceasefire and the Afghan government’s inclusion in future negotiations.

Alarmingly, women’s rights are being sidelined, heightening concerns that a potential power-sharing arrangement or constitutional reform will facilitate a reversion to brutal Taliban rule and the reinstitution of its contorted interpretation of Sharia. The talks’ lack of priority on human rights and women’s rights specifically, is reinforcing women’s fears that their lives, freedom and agency will be negotiated away in service of a temporary, flawed and ultimately, unsustainable peace.

The Afghan government’s exclusion problematically confines the bargaining to the interests of the U.S. and the Taliban, not the Afghan people. After four decades of conflict, hundreds of thousands of deaths and the distinction of being the world’s bloodiest conflict, the Afghan people are war-weary and tired of external and unrepresentative forces dictating their future. The Afghan government’s marginalization not only prevents it from articulating the positions of its citizens, but also discussing terms for institutional mechanisms of peace, such as security sector reform; disarmament, demobilization and reintegration processes; and transitional justice and reconciliation initiatives.

The optimism surrounding these talks deems that a peace agreement with the potential of implementation is better than a precipitous withdrawal that creates a vacuum and leads to Afghanistan’s regression to its pre-9/11 condition.

However, the Taliban remains bent on a fulsome withdrawal of foreign forces, reclaiming power and strictly enforcing its warped brand of Islam. Fear exists that the diplomatic language emanating from the Taliban’s savvy political operatives in Doha is papering over the brutal realities and forces on the ground, who will never be satisfied with partial control and women’s open exercise of their fundamental rights.

The U.S. concession-filled diplomacy comes amidst the Taliban’s most significant territorial control since 2001 and in the wake of President Trump’s announced quixotic reduction of U.S. forces, hamstringing American leverage. The situation is being likened to the end of the Vietnam conflict, where the U.S. sought “peace with honor” while surrendering in defeat —resulting in a crumbled agreement without America’s enforcement.

The Taliban may likewise make significant promises only to violently grab power once U.S. forces withdraw — at once vitiating America’s commitment to the Afghan women, who have borne a disproportionate cost of this war and delegitimizing the 18 years of blood and treasure spent in Afghanistan.

The gender inequality, domestic violence and discrimination that skyrocketed during the Taliban reign led to Afghanistan’s consistently ranking as one of the worst places in the world to be a woman. Since the 2001 intervention, which the U.S. partially predicated on releasing women from repressive grip of the Taliban, Afghan women and girls have made phenomenal gains.

They now have increasing access to education, economic opportunity and other human rights. Subversion of their significant progress cannot be tolerated. The U.S. has an obligation to the Afghan government it supports and its people—specifically, its women and girls—to promote stability and prevent the country from descending back into intolerant Taliban rule.

While the Taliban refuse to negotiate with the Afghan government, the Afghan government has thus far failed to meaningfully incorporate women into peace building initiatives in preparation for intra-Afghan dialogue. Women’s omission inhibits their ability to convey their unique experiences, grievances, priorities and hopes for Afghanistan’s future and to shape post-conflict institutions and broader society. The creation of sustainable peace is impossible when half the country’s population is not consulted.

The government must provide for women’s meaningful participation — not tokenism — in accordance with United Nations Security Council Resolution 1325, which calls for incorporating women into all facets of peace building. Kabul must support extensive training of women as advocates, mediators and negotiators prepared to participate in future talks, while amassing and amplifying voices from diverse ethnic, religious and socio-economic groups.

Afghan women must be able to elucidate their concerns about the peace process and their traumatic experiences after bearing the brunt of the Taliban’s brutality. Women’s involvement must occur at the most nascent stage of peace building to reify gender inclusion, establish their role in the state’s future, safeguard their rights, shift entrenched cultural attitudes and preserve and expand their empowerment before the peace for which they yearn can be attained. Indeed, women’s substantive role in negotiations is vital to the long-term durability of peace agreements.

These mothers, midwifes, engineers, teachers and parliamentarians, amongst others, have kept Afghanistan’s lifeblood alive often despite the deaths of their fathers, husbands and sons. Their profound resiliency empowered children, treated sickness, built roads and drafted laws while extremists tore their country apart. Afghan women have earned their seat at the negotiating table.