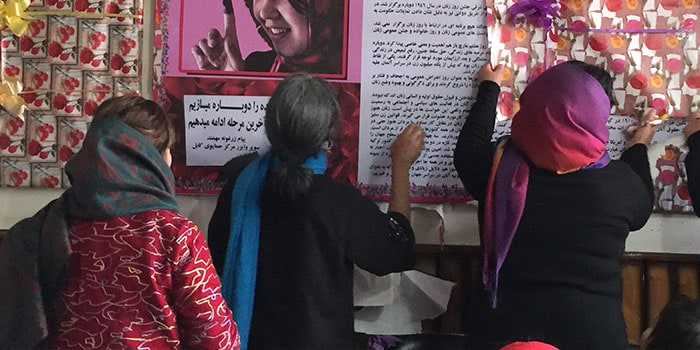 In April of 2001, a few women living in New York—appalled by the terrible state of Afghan women then living under Taliban rule—gathered together with the aim of responding to this travesty. This small network of volunteers rolled up their sleeves and, as a first step towards their goal, founded Women for Afghan Women (WAW) to advocate for global support for Afghan women’s rights.

After the attacks on the US on September 11th that same year, life for Afghan women would change. With the ousting from power of the Taliban by coalition forces late in 2001, WAW committed to its mission to elevate and empower Afghan women’s rights in Afghanistan and in the US.

With time, resilience, and perseverance, WAW would become the largest women’s rights organization operating in Afghanistan, with 32 centers, a vast network of services and programs, and a women’s rights training program that altogether reached every province in the country—all led by local Afghans. In the US, WAW would become the go-to resource and service provider for Afghans in New York, the rest of the East Coast, and beyond. We are the only Afghan-led organization in the US that provides protection and support to Afghan survivors of domestic violence. We are also the only Afghan-led organization in the East Coast that provides culturally sensitive and comprehensive programs to Afghans in Dari and Pashto (Afghanistan’s most widely spoken languages).

The return of the Taliban in Afghanistan poses a serious challenge for us as an organization and a devastating one for Afghan women. But, we remind ourselves every day that WAW was established when—and because—the Taliban were in power in 2001.

We remain grounded in these historical facts and our mission. And, although we are heartbroken by this reversal of conditions, we are preparing, once again, to respond to the conditions Afghan women will now be living under the Taliban.

Right now, existence is resistance for WAW—as it is for every woman and girl in Afghanistan. The situation on the ground is, unfortunately, very much like that day in April 2001 when we first started our mission. But, we refuse to be silenced or to cower.

We are working to adjust and adapt to the new reality on the ground. We are negotiating with the new administration in Afghanistan to allow us to continue our work. Although our women’s shelters are closed, WAW is still caring for many children in our Children’s Support Centers and continuing our work with internally displaced persons and refugees. We are determined to employ every resource we have to continue our critical humanitarian work in Afghanistan.

In the US, Our New York Community Center (NYCC) has been working with immigrant communities for years to provide culturally sensitive services, including case management, legal services and support, empowerment classes, and youth and seniors programs, among others. Today, this network of comprehensive programs and services has expanded to attend to the needs of new refugees arriving from Afghanistan, including translators, childcare workers, teachers, doctors, nurses, mental health professionals, and pharmacists. As Afghan refugees arrive in the US, WAW’s NYCC is working day and night to coordinate with refugee resettlement agencies in Virginia and New York to welcome Afghans able to evacuate from Afghanistan, with warmth and love.

Meanwhile, we will not leave Afghanistan. We will support our Afghan sisters and brothers who remain in the country, and those who are resettling in the United States.

We have no doubt that the spirit of #AfghanWomenStrong is still alive.

Please help us to keep the work going.